Iconic Photos of US Imperialism's Perpetual War on the World: Telesur

U.S. Exceptionalist myths about its military spreading "democracy" throughout the globe leave out a record of indiscriminate violence and terrorism.
While the mythmakers in the Pentagon and corporate media spin fairy-tales and convenient lies about the global track record of the United States' foreign policy, the bloody role played by its armed forces is a matter of historical record known well across the world.
teleSUR revisits some iconic photographs of the bloodshed and pain inflicted by U.S. imperialism around the globe, from the killing fields of Wounded Knee to the dungeons of Abu Ghraib.
"Burial of the dead at the battle of Wounded Knee, S.D." U.S. Soldiers putting Indians in common grave; some corpses are frozen in different positions, South Dakota, January 17, 1891 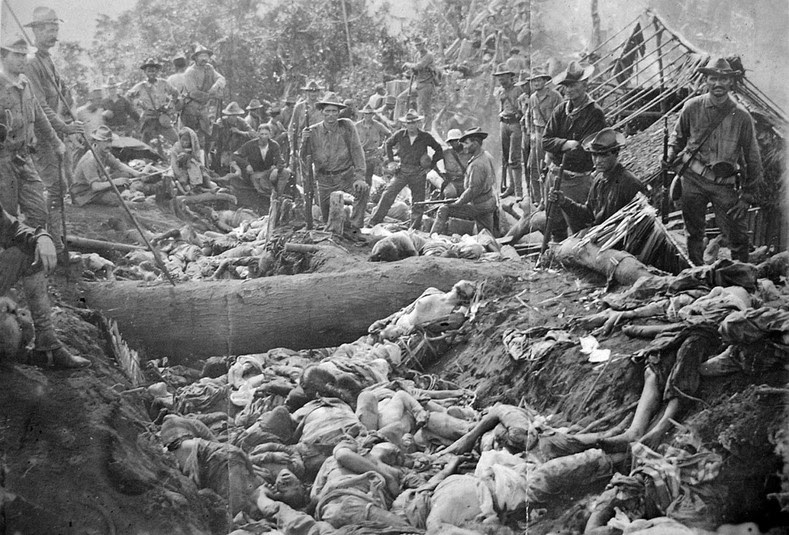 The bodies of Moro insurgents and civilians killed by U.S. troops during the Battle of Bud Dajo in the Philippines, March 7, 1906.Photo:National Archive
A view taken from Dresden's town hall of the destroyed Old Town after the allied bombings between February 13 and 15, 1945. Some 3,600 aircraft dropped more than 3,900 tons of high-explosive bombs and incendiary devices on the German city. The resulting firestorm destroyed 15 square miles of the city center, and killed more than 22,000.Photo:Reuters 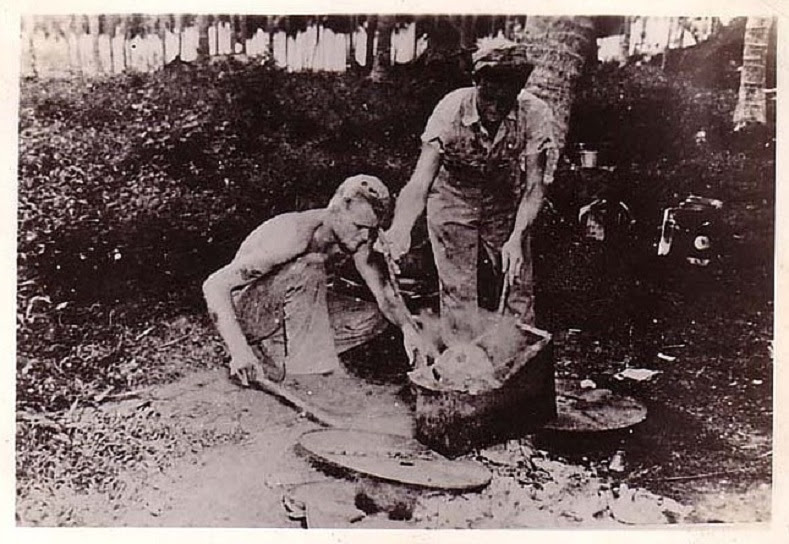 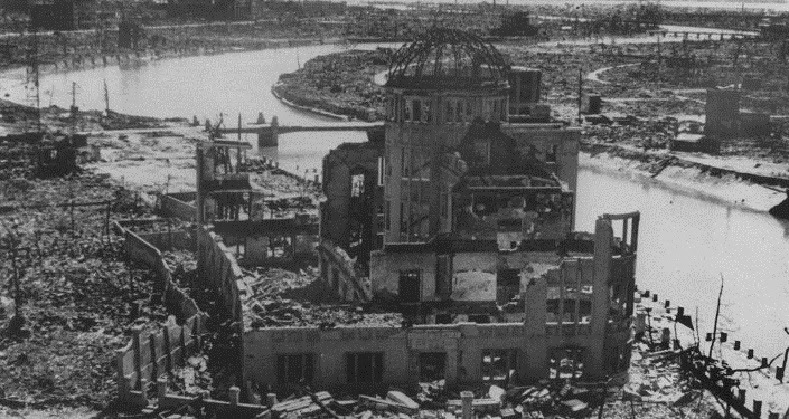 A photo dated September 1945 of the remains of the Prefectural Industry Promotion Building after the atomic bombing of Hiroshima.Photo:AFP This U.S. Army photograph, once classified "top secret", is one of a series depicting the summary execution of 1,800 South Korean political prisoners by the U.S.-backed South Korean military at Taejon, South Korea, over three days in July 1950. Historians and survivors claim South Korean troops executed many civilians behind frontlines as U.N. forces retreated before the North Korean army in mid-1950, on suspicion that they were communist sympathizers and might collaborate with the advancing enemy.Photo:National Archives 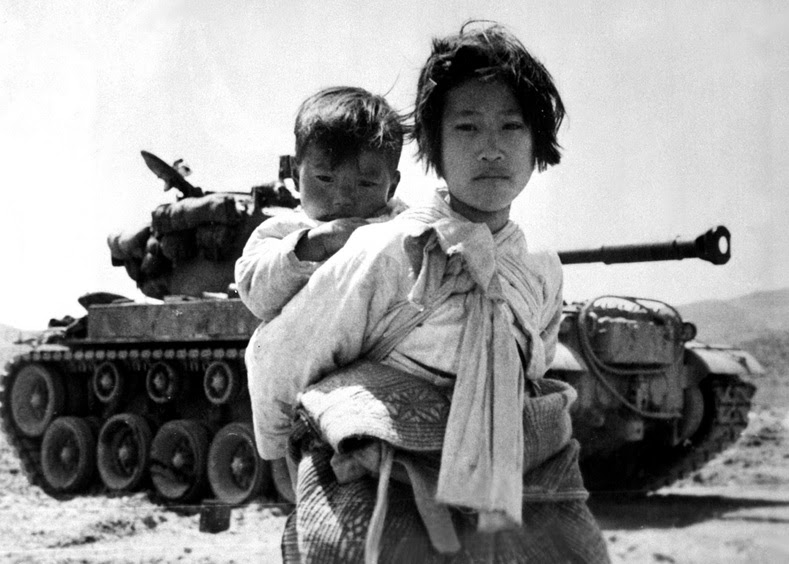 With her brother on her back a war weary Korean girl tiredly trudges by a stalled M-26 tank, at Haengju, Korea. June 9, 1951.Photo:U.S. Navy 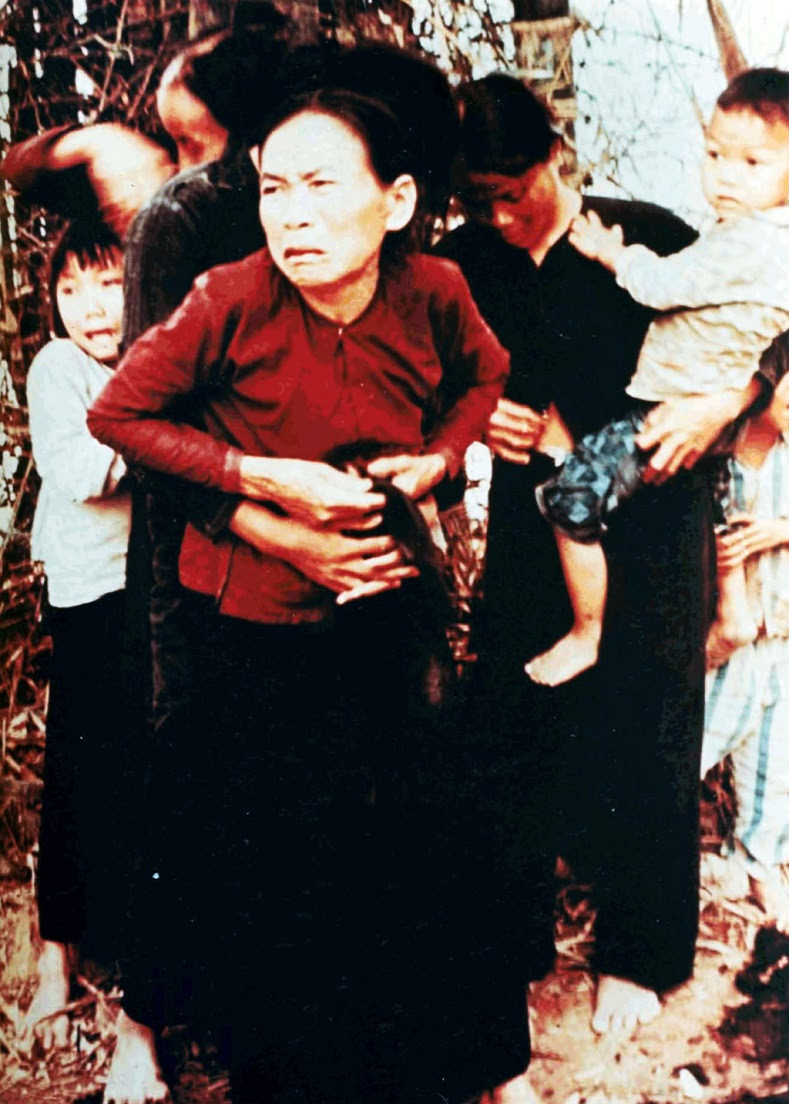 Unidentified Vietnamese women and children before being killed in the My Lai Massacre.Photo:Library of Congress 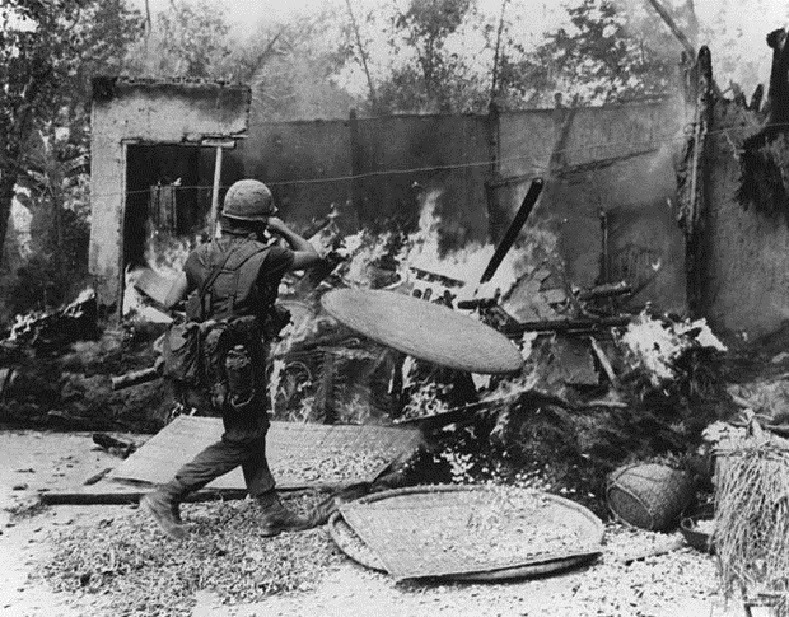 A soldier burning down a hut in My Lai village, Vietnam.Photo:Public Domain 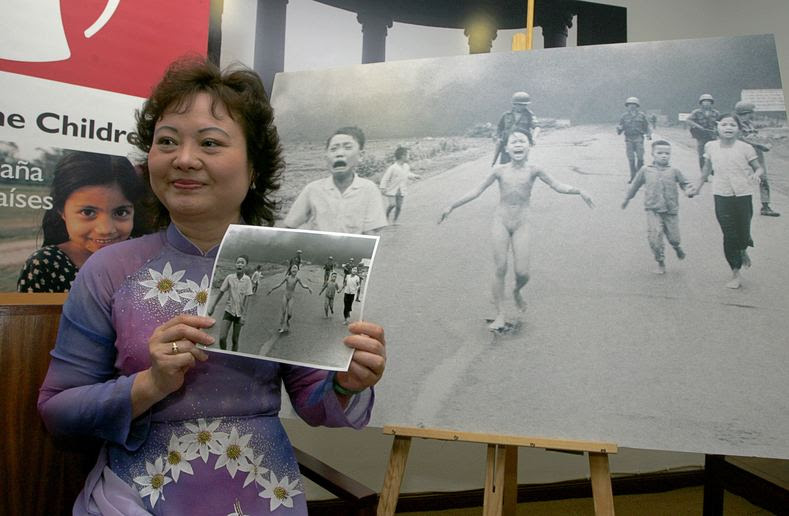 Phan Thị Kim Phúc, also known as "Napalm Girl," poses with the iconic photo taken in Trang Bang by AP photographer Nick Ut which showed her at nine years of age running naked on a road after being severely burned by a South Vietnamese napalm attack.Photo:EFE 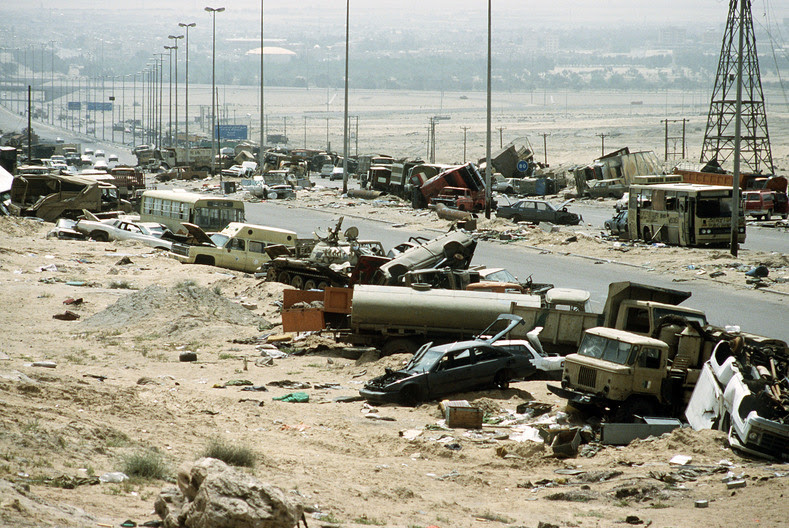 Destroyed Iraqi civilian and military vehicles on the "Highway of Death," officially known as Highway 80, during the First Gulf War April 1991.Photo:Public Domain 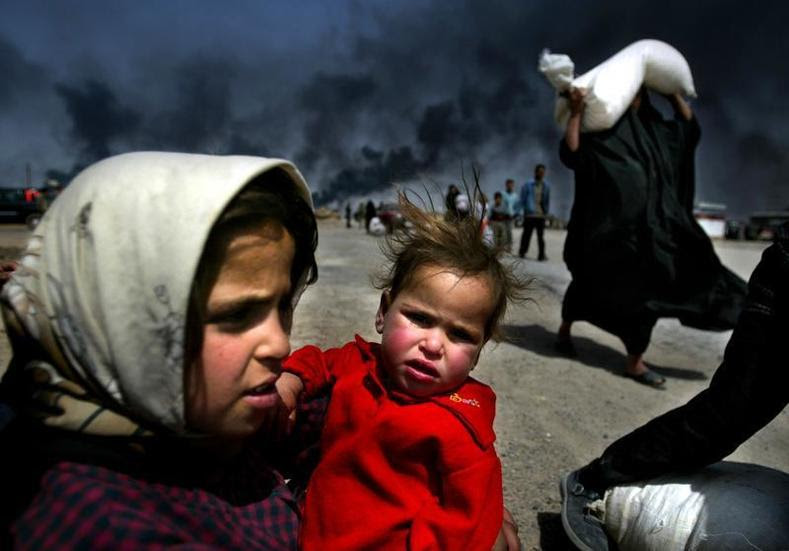 An Iraqi girl holds her sister as she waits for her mother (R) to bring over food bought in Basra March 29, 2003.Photo:Reuters 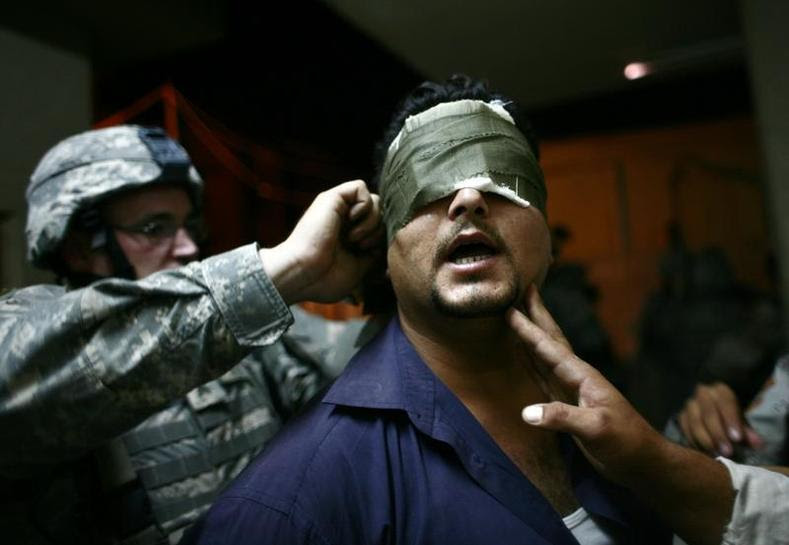 U.S. soldiers blindfold an Iraqi man after arresting him during a night patrol at the Zafraniya neighborhood, southeast of Baghdad September 4, 2007.Photo:Reuters 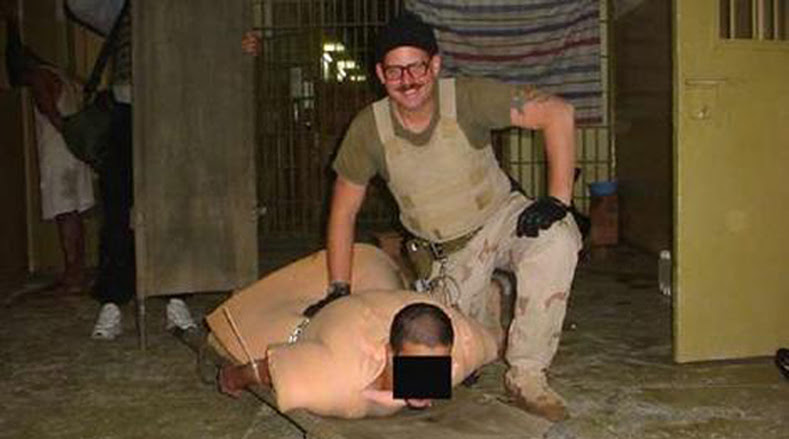 Sgt. Charles Graner posing with a stripped and humiliated detainee.Photo:Reuters Sexual abuse and torture were widespread at the notorious Abu Ghraib prison.Photo:Reuters 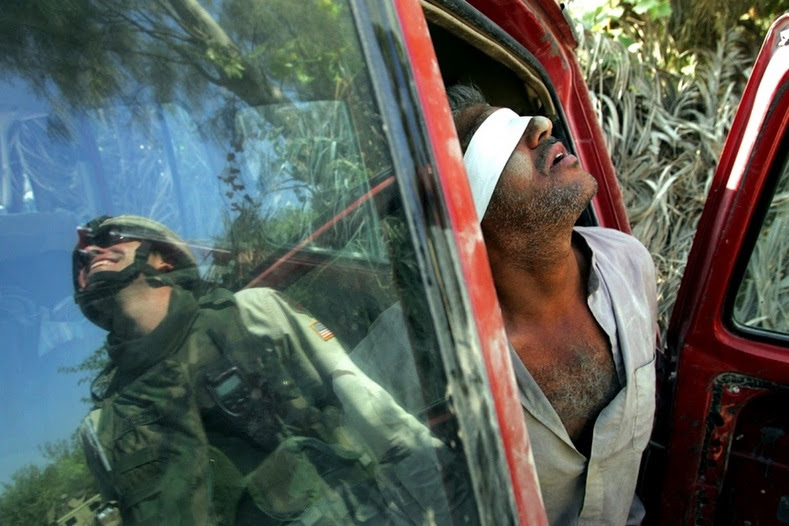 An Iraqi man suspected of having explosives in his car is held after being arrested by the U.S army near Baquba.Photo:Reuters An unidentified detainee standing on a box with a bag on his head and wires attached.Photo:Reuters Andrew Holmes poses with the body of Gul Mudin immediately after the boy was killed.Photo:Reuters