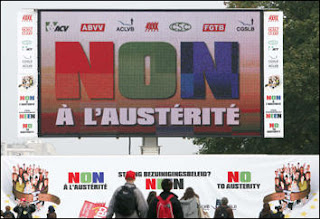 CLEAR MESSAGE: Protestors walk past a billboard which reads: 'No to austerity' during a demonstration in Brussels on Wednesday

The halls of EU power in Brussels trembled to the footsteps of more than 100,000 workers on Wednesday as they converged from across Europe to reject crippling austerity cuts.

Trade unions and activists representing 24 countries brought the city to a standstill as they snaked their way through the streets with a thunderous march that ended in a rally at the Esplanade du Cinquantenaire park.

As Spanish workers staged a general strike and Greek rail staff walked out over privatisation, the common call in a multitude of languages was for co-ordinated action against the biggest attack on Europe's working class since the 1930s.

A sea of banners proclaimed that workers would not be forced to pay with their jobs and services for a crisis caused by the unmitigated greed of bankers.

Banners and flags from RMT, PCS, NUT, TSSA, CWU, Napo, Unite and Usdaw were prominent among a noisy British contingent.

Brussels police were out in force, barricading the entrance of every bank in the city as well as the European Commission headquarters. But the massive event passed peacefully.

As the day of action - called by trade union umbrella organisation ETUC - took place outside, the EU Commission announced a package of proposals to crack down on hard-pressed member states, threatening them with huge fines if they failed to run their economies "efficiently."

Speaking to the Star from the rally, RMT leader Bob Crow condemned dangerous EU moves to impose centralised caps on public-sector pay and sanctions against member states deemed not to be cutting deep or fast enough.

"Workers across Europe face the same threat to jobs, public services and pensions, and that threat originates from exactly the same source - the centralised banks and the political elite who do their bidding," he explained.

And he rubbished government claims that there was no alternative.

Unison youth delegate Gerry Cowell, a musician outreach worker from Colchester, was proud to be on the march alongside other workers and pensioners.

"It is important for us all to unite to oppose cuts wherever and to make our protest locally, nationally and acros Europe," she told the Star.

FBU national officer Dave Green hailed the "fantastic turnout" saying that it showed "the enormous level of resistance to austerity measures that governments will face."

He added: "Economies across Europe have been brought to the verge of collapse by the out-of-control greed of bankers."

"Today's demonstration shows the trade union movement is a huge family that is united against cuts and poverty and against non-inclusive societies."

She stressed that unions had a responsibility to lead the fight to save services and jobs across the continent.

Organised pensioners across the continent also joined the march, with Dot Gibson of the British-based National Pensioners Convention stressing: "It is important for pensioners to link up with the union movement in opposing the cuts and attacks on workers pensions."

She said she was looking forward to a meeting next week with French, Italian and Spanish pensioners' organisations held in Paris to discuss their united response to the cuts.

Cedric Mahu of France's CGT union, which had 10,000 delegates on the march, said he would be on strike again on October 12 in his country's national strike against attempts by the Sarkozy government to take the hatchet to French workers' pensions.
at September 29, 2010