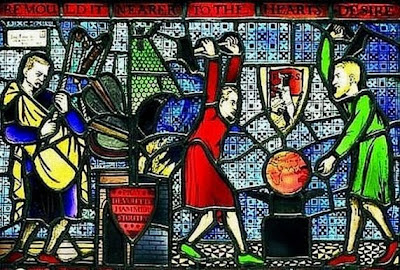 Those who still feel themselves to be part of the radical Anglo-Catholic tradition may be interested in the following document composed by two young Anglican priests in the East End of London in 1947. One, Jack Boggis, had been a member of Conrad Noel's Catholic Crusade until it disbanded in 1936. The other, Gresham Kirkby, was a member of the League of the Kingdom of God - which, he claims, was never dissolved, makng him its last surviving member!

1. What is a Socialist Christian?
A christian who works for an international, socialist order of Society.
2. Why does he work for this?
Because he believes in the coming of the Kingdom of God on earth.
3. What is the Kingdom of God?
An order of justice, love and peace, for whose coming on earth Jesus taught us to pray.
4. What other names are there for this New Order?
The New Age, the Divine Commonwealth, the City of God which St John saw coming down from Heaven to Earth.
5. What do you mean by Socialism?
Socialism is a system based on common ownership.
6. Why do Socialist Christians believe that the Kingdom of God demands a socialist order?
Because common ownership is based on natural law, the revelation of the Bible and the Christian tradition.
7. Do Socialist Christians believe in the possibility of a socialist order?
They believe that this is within the purpose of God, and is a necessary development out of the collapse of capitalism.
8. Do Socialist Christians believe in a particular form of socialism?
. They believe in a socialism which combines justice and freedom.
9. Have they any pattern for the emerging socialist order?
They see the pattern in the holy and undivided Trinity, variety in unity and unity in variety, wherein none is greater or less than another and all are equal.

Evils Which Socialist Christians are Pledged to Fight

Social Reformism, which bolsters up the capitalist system.
Bureaucracy, which stifles initiative.
Fabianism, which hands over control to the do-gooders.
Dictatorship, which betrays the revolution.

The Four Marks of Socialist Order

Hancock, who proclaimed 'the banner of Christ in the hands of the Socialists'.
Headlam, who taught that 'it is the Mass that matters'.
Marston, who saw that the Church is 'God's co-operative society'.
Noel, who gave us the people's Life of Jesus.

1. The Brickmakers' Strike
2. The Year of Jubilee
3. Samuel on Monarchy
4. Elijah humbling Ahab
5. The Maccabean Struggle
6. The Jerusalem Collective
7. The Peasants' Revolt
8. The Tolpuddle Martyrs
9. The General Strike
10. The Red Flag

Prof. Mario Caligiuri: “The coronavirus represents the death of capitalism and an opportunity to reinvent society »

Publié le 30 mars 2020 Prof. Mario Caligiuri. DR. Mohsen Abdelmoumen: What is the situation in your country Italy in the cont...